Two years ago at the Long Beach, CA SCUBA Show we booked a 10 day trip to Magic Oceans Resort on the island of Bohol in the Philippines and the trip finally came around and off we went for our first trip to the Philippines! Shawn Kimsey joined Red and I on this adventure as my dive buddy and just genuinely great travel partner. We flew Delta to Inchon, South Korea, had a short layover and then Shawn met us for the Korean Airlines flight to Cebu where we overnight-ed at the Waterfront Airport Hotel. (while it is across the street from the airport don’t plan on walking it!) The next day was spent fighting through traffic to get to the port in time for the 2 hour ferry ride to Tagbilaran on the island of Bohol followed by a 2 hour drive to the resort. 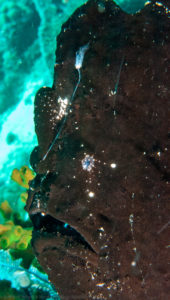 The Magic Oceans Resort is the second location for the operation and has only been around for 3 years. The layout, rooms, pool, etc are all lovely, the food was great, drinks cheap and the staff was AWESOME! It was just this year that they installed a dock, previously you needed to wade out to the boats. Well as it turned out we did too as the typhoon surge made them dismantle the dock temporarily. By the end of our trip the seas had calmed down and most of the dock was back in business. 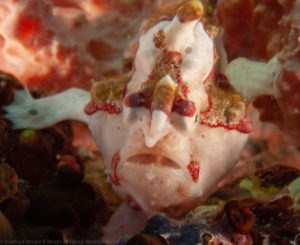 The diving was mixed due to the rough seas which forced us to dive in some limited areas for the first several days. After they calmed down some we were able to go to the south walls. They hadn’t been able to dive there for two months due to the weather so it was a fresh experience for us and the guides as well. The visibility was mixed due to the seas so I shot macro the whole trip and focused on the critters of which there were plenty! Frogfish, pipefish, pygmy seahorses, nudibranch galore and even a pair of sea moths!

We had two moments of excitement – the first was Shawn being off balance when a wave hit the boat and he broke the railing on the ladder with his head as he got pitched overboard. Quick action by him and the captain resulted in Shawn being ok. The boat took a couple of days to repair so we were down to one ladder. The second event was 20 meter’s down, 15 mins into a dive and the Omniswivel that I had on my regulator violently blew an o-ring, forcing me to surface on someone else’s octo. I always maintain that I feel safer on a rebreather than open circuit as you are just one o-ring away from death on OC and I have all sorts of options on a CCR, turns out I was right. All good, training kicked in and it was uneventful if a bit noisy.

The return trip was the same and the staff of Magic Oceans arranged everything and took care of everything to get us back to Cebu for another overnight and then two long flights home. Katie at Bluewater Travel again helped us with all the arrangements and booking. As I said about last years trip CALL HER! 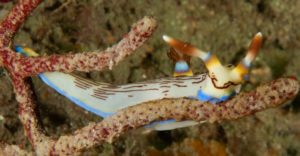